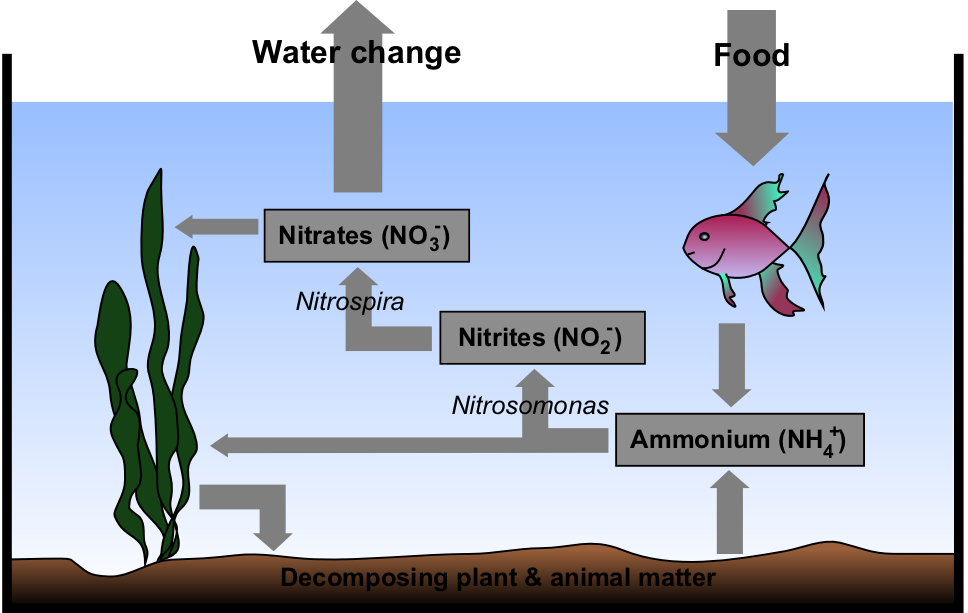 To start the nitrogen cycle within your aquarium, you will first need a source of ammonia and preferably a source of beneficial bacteria. The safest and quickest way to begin to cycle your marine aquarium is by adding live sand and live rock. Live rock and live sand will be needed for your reef aquarium anyway, why not use it to save time and money to begin cycling the tank as well? Anytime you add live rock or live sand to your aquarium, there will be some “die-off”. Die-off refers to the bacteria and microscopic organisms that have died since they were last removed from a body of water. This die off and other bacteria within the sand and rock will add ammonia to your aquarium, the first step. When cycling your aquarium, ammonia is normal. But, ammonia in an established aquarium with fish and corals could prove to be deadly! By that time, you will hopefully have developed enough beneficial aerobic and anaerobic bacteria to safely convert and remove it before it can cause any damage.

After a few days and with some high levels of ammonia, the bacteria named Nitrosomonas will soon begin to take root in your aquarium. Nitrosomonas bacterium feed on ammonia which ultimately converts it to nitrite. While the amount of ammonia in your aquarium increases, colonies of this beneficial bacteria will begin to thrive to take advantage of the buffet you have created. Nitrite is still dangerous in a reef aquarium but it is one step down from ammonia. Keep in mind, these processes will take place without you noticing unless you are testing daily.

With the abundance of nitrite comes the next beneficial bacteria commonly referred to as Nitrobacter. This bacteria feeds on nitrite and then turns it into nitrate! Nitrate is the least harmful to marine fish and corals but must remain in check through adequate filtration and timely water changes. Nitrates, along with phosphates, are the two main contributing factors to algae growth in an aquarium. If you’re seeing a lot of algae blooms, check your nitrates. Then check your phosphates. Lower both with hefty water changes.

Some aquarists find it helpful to use other sources of ammonia to jump start the nitrogen cycle so that they may begin to add fish sooner rather than later. Damsels are popularly added to an aquarium for this reason. Damsels are cheap, active, colorful and extremely hardy. These are some of the only fish that can survive the extreme changes within a cycling aquarium.

I believe that Rome was not built in a day. It’s better to wait it out and take your time slowly cycling the tank. Any good home must first be placed on a well-built and sound foundation. Take my word for it, you DO NOT want to have to take your tank apart to recycle the tank a couple years down the road once you have hundreds or even thousands of dollars invested in livestock.

When testing the water being put into your aquarium, the 3 big tests (ammonia, nitrite & nitrate) should clock in at zero ppm (parts per million). Within 24 hours of adding live rock and live sand (and damsels if you choose), you should see an increase in the amount of ammonia in your tank. After a few days, you should see nitrites rise while ammonia falls. Within about a week after ammonia has completely dissipated, nitrites should follow suit, leaving you left with a large amount of nitrates in your aquarium. Perfect!

Now that you’re done cycling your aquarium, your beneficial bacteria colonies have successfully taken root and now they’re ready to help you maintain your own reef aquarium system! The last step before you can add any fish is a rather large water change (30-40%) to lower those nitrates. Then, perform one full battery of tests including:

If all is well, you’re ready for the next and most exciting step, adding your first fish into the aquarium! The next chapter in this series covers exactly that, Your Aquarium’s First Inhabitants.

As always, do your research, ask questions and reach out for help when necessary. We are all one big family trying to create a small piece of the ocean in our living room!